A big thanks to Ivan for leading seven club members on this ride along some very scenic minor roads to Goole docks and for an interesting talk about his 1937 vintage tugboat 'Ruffian'.  This vessel is special in that it was the smallest iron plate/rivetted vessel to be built and conventionally launched on the Tyne.  The huge two stroke, sleeve valve tugboat engine has now been removed and the area used for cabin space, a smaller diesel now powers it at the rear as a pleasure craft.  Ivan explained the technical details of this craft and its interesting history.

After a cup of tea on board Ivan took us on a tour of the docks on Ruffian, what a treat on such a warm sunny day.

The day was finished off with a pint at Ivan's bar in Saxilby.

Thanks Ivan, a great day out.

Thanks to everyone again for making this years Concours so successful.  The weather was good and we good turn out of motorcycles and people.  Over 50 motorcycles in total were on show with 37 marked up for voting.

The raffle made £150 thanks to everyone for their donations especially Carrot Cycles and Andy & Debs for ticket selling.

A one minute silence was held in memory of Steve Bullen, a long standing member of the club and one of last years winners, who past away recently.  The  proceeeds from the raffle were donated to the charities chosen by Steves' family (St Barnabus Hospice and Marie Curie Cancer Care).

The main points are as follows.

Dave Lee was re-elected as Chairman.

Les Carter was re-elected as Secretary/Treasurer.

Stewart McCarthy was re-elected to continue as Committee Member.

Dave Dawson (in his absence) was re-elected to continue as Committee Member.

The May ride out has been changed to the Wheatsheaf at Louth and October to the Bromley at Fiskerton, Notts.

County Cups, based new RWH Motorcycles at Pelham Bridge can now embroider the new log onto teeshirts, polo shirts and sweatshirts.  If yoiu are interested just call in and choose a garment and they will embroider the logo on for you.   Sweatshirts and polo shirts cost approx £21 and tee shirts £12 with the logo embroidered on.

All aboard the 'Ruffian' 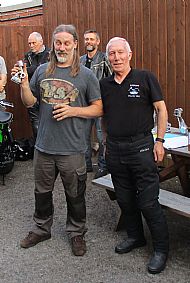 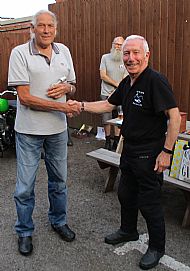 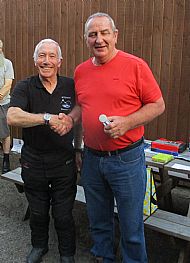 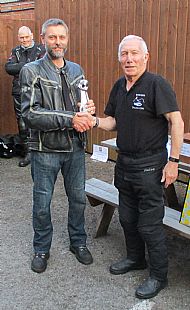